Link state routing protocols maintain topology tables to determine the best candidate to place in the routing table. EIGRP is no different - it uses this topology table to build a vision of the network from the perspective of each participating router. This topology table is reviewed by the routing algorithm (in the case of EIGRP, it is DUAL) and decisions are made regarding what gets placed into the routing table. Since EIGRP uses bandwidth and delay as metrics in this decision making process, they are used to decide which link out of several redundant connections to use to get to a remote subnet.

A big problem with this type of decision making process is that it needs to be made every time the topology changes.

The topology we’ll work with here is included below: 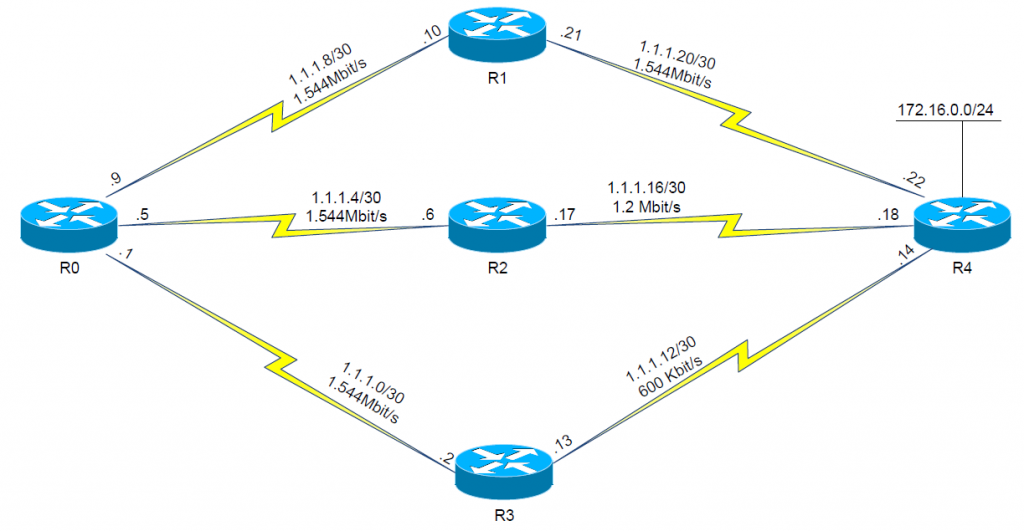 We’ll be working from the perspective of R0. The idea is to get to the remote subnet attached to R4,  172.16.0.0/24. This is done by selecting one of three possible next-hop routers, R1, R2, or R3. I have adjusted the bandwidth of the links shown by using the “bandwidth” command on all routers. No delay configurations have been made.

The link from R0 to its three next-hop routers are all at T1 speed, 1.544 Mbit/s. However, the links from each of those routers to R4 each have varying bandwidth settings configured with the “bandwidth” command in order to impact metric calculations.

Since EIGRP uses bandwidth as a factor to influence metric, the link between R1 and R4 will be given the lowest metric, and therefore will be preferred. Observe the following output on R0:

The Feasible Distance (FD) of the route from R0 to R1, which is a representation of the route’s metric, is 2684416. This is the lowest of all the links, so it is selected to be placed in the routing table. This route is called the “successor” route.  However, the topology table shows another route through R2. This demonstrates the concept of a “feasible successor”, or FS.  The parentheses after the next-hop address shows two things. First, the FD is shown. The next value is the reported distance (RD). This value represents the FD of the same route, but from the perspective of that next-hop router. The next-hop router communicates this value to R0 so that it can select a FS for the route.

If we were to administratively shut the link to R1, we would see the route to R2 immediately take it’s place:

Doing this allows communication to travel across the network uninterrupted, because the router kept the route to R2 ready and waiting in case the successor route was dropped. I performed a ping from the LAN attached to R0 to a workstation on the 172.16.0.2 subnet to ensure that no packets were dropped. I shut down the link to R1 right after I started the ping:

As you can see, no packets were dropped. The link to R2 is now the successor route. However, there is no feasible successor. We have a redundant connection through R3, but the RD for that route is too high to be used as a feasible successor. If we shut down the connection to R2, EIGRP must recalculate a new route before updating the routing table:

Dropping the connection to R2 results in dropped packets because there was no Feasible Successor for this route.