In a previous post, I explored the basics of IP routing, and in the process, we discovered an interesting default feature of OSPF. When there were two OSPF routes in the routing table to a network, and both routes had the same cost, the router performed load balancing between the two. Take, for instance, the following route:

In this example, every packet sent would take one of two routes. The next hop at this particular router would be either 1.1.1.13 or 1.1.1.2. As a result, the path bandwidth from R0 to R2 was essentially doubled to 200Mbit/s because the two FastEthernet interfaces were only being utilized at half the normal rate.

As you can see, the metric for each route is 12, but what if one path was a bit slower, and therefore had a different metric? The better route would make it into the routing table, and the other would be set aside. However, we end up with a link that’s completely idle, and that’s not what we want.

Unfortunately, with OSPF we aren’t able to do load balancing between links of different cost, so we must switch gears and go to EIGRP, which allows us to do this, and it’s called “Unequal-Cost Load Balancing”. 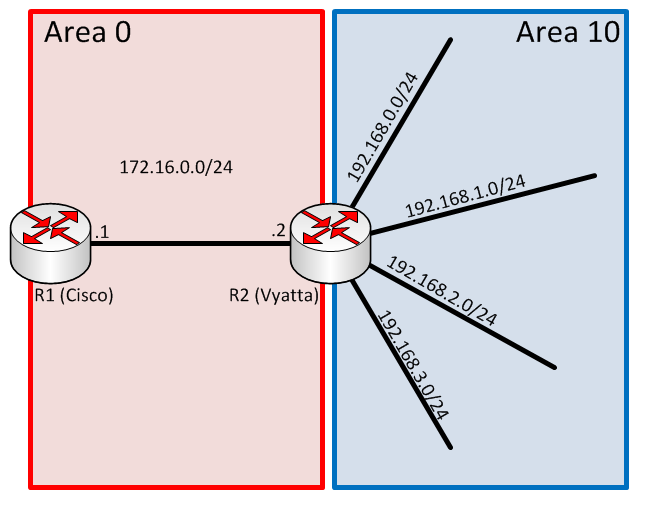 This diagram isn’t completely different from my original post. We’re on R1 and we’re trying to get to the remote 172.16.0.0/24 network. I set up R4 just so we had something in the middle to ping. I also statically configured the bandwidth of the serial links as shown in the diagram. If you do the math, you’ll notice that the link between R1 and R2 is T1 speed, and the link between R1 and R3 is precisely half that.

Let’s take a look at the routing table to see how things work with a basic EIGRP configuration:

A look at the EIGRP topology table shows that R1 is aware of the additional route, but it isn’t good enough to be in the routing table.

In fact, it’s not even good enough to be a feasible successor, and that makes sense because R2 and R3 are connected to the same FastEthernet switch, so both routes’ reported distances would be equivalent.

In order to get this additional route to be acceptable to EIGRP, we need a simple yet powerful command. In EIGRP configuration mode, we enter the following:

This command specifies that we would like to include routes that have a metric up to and including 2 times that of the route with the best metric. Our slower link has exactly half the bandwidth, and actually a bit less than twice the metric of the faster link, so this keyword will be able to consider this extra route to be placed in the routing table.

Lastly, it’s important to remember that EIGRP will auto-calculate load-balancing parameters once this additional route is selected. It will do it’s best by dividing the two metrics and rounding to the nearest integer.

If we take a look at the routing table and look at the details for our remote network, we have a bit more visibility into the ratio of traffic being placed on each link.

Our T1 link has a metric of 2195456, and the half-T1 has a metric of 3853568. Divide the smaller metric over the larger metric and you get 56.9. That’s our percentage difference between the metrics. If you do the same process for the traffic share counts, you get 57.0, which is pretty damn close. It can therefore be said that for every 240 packets sent over our T1 line, we send 137 over our half-T1.

Let’s run a traceroute from R1 to see how our changes turned out:

You should be aware there are more configuration options available to fine-tune exactly how much traffic is placed on each link. However, for our purposes, we’ve successfully load balanced across both links proportional to the bandwidth on each link.

For more information, see below: