The networking industry is at a crossroads. In the past few years, we’ve seen a flurry of activity in the world of software-defined networking (SDN), but this has mostly just resulted in a bunch of new products. I don’t feel that this has done nearly enough to improve network operations. In fact, this has in many ways resulted in more complexity.

What we desperately need more than shiny new products (hardware or software) is a better understanding of simple tools and open source software. We need to be willing to take more direct control over our infrastructure, instead of relying on a vendor and their support contracts to solve all our problems. While vendors should still serve a critical role in operating a network, I feel strongly that now more than ever, end-users have the power to really own their own management layer, and the roadmap for how their organizations offer network services to the teams that run (and in some cases develop) applications for the business.

To that end, I’ve been spending the past six months or so ramping up my own personal efforts at helping the network community as a whole to start this journey. These simple contributions may not be as sexy as an SDN startup with VC funding, but I truly believe that many of our biggest challenges have fairly simple solutions, if we’re willing to spend some time educating ourselves on these building blocks.

Hot off the (virtual) presses!

I am extremely happy to announce one of these efforts today. A few months ago, I was fortunate enough to start co-authoring a book on network automation along with Jason Edelman and Scott Lowe. This book is being published by O’Reilly, and is titled Network Programmability and Automation: Skills for the Next-Generation Network Engineer: 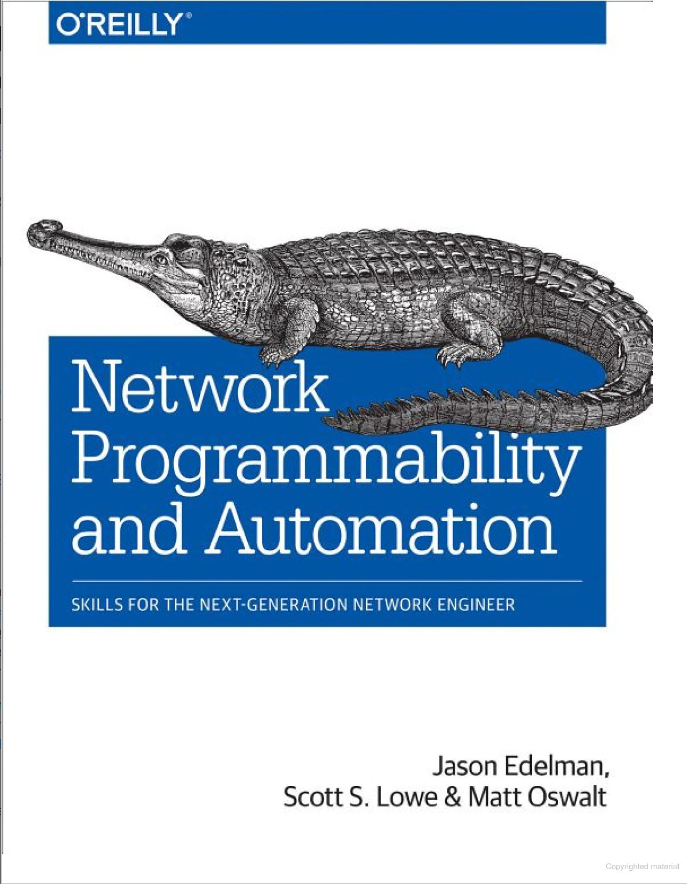 I am also really excited to announce that the early access edition of this book is available TODAY, right here. For those not familiar with the usual O’Reilly early access release, this is a way for authors to get part of the content into your hands as early as possible, and get your feedback.

In this release, we’ve published the following chapters:

We feel that this makes for a strong early release, and we really look forward to hearing your feedback on the content provided thus far.

The final book is still being put together, but here’s a sneak peek of some of the topics that we are thinking about putting in:

Note that this should not be interpreted as the final list, as this book is still a WIP. All of this is subject to change.

I feel this represents a solid set of topics for providing network engineers with the tools to evolve their skills. Please let us know if you have any feedback here!

If you sign up for the early access (and we hope you do) - you should be provided with an email address to reach us with feedback. Or, you can reach all of us on Twitter:

I think I can speak for all three of us when I say we’re psyched to work on this together, and to be able to provide something like this to the networking community.

As for me personally - consider this just the beginning. I am very interested in helping the networking community grow with a better understanding of the available tooling, and I plan to do much more in this area.