Earlier I wrote about some fundamental principles that I believe apply to any form of automation, whether it’s network automation, or even building a virtual factory.

One of the most important concepts in mature automation is autonomy; that is, a system that is more or less self-sufficent. Instead of relying on human beings for input, always try to provide that input with yet another automated piece of the system. There are several benefits to this approach:

The reality is that we as operations teams are already event-driven by nature, we’re just doing it in our brains. Every operations shop works this way; there is a monitoring tool in place, and the ops folks watch for alerts and respond in some sort of planned way. This sort of event-driven activity is happening all the time without us thinking about it. As you explore the concepts below, note that the main focus here is to simply reproduce those reactions in an automated way with StackStorm.

These are all concepts I’ve been seriously pondering for the past 2 years, and have spoken about at several conferences like Interop. Recently, when I saw what the team at StackStorm was building, and how well it aligned with my beliefs about mature automation practices, I had to get involved.

StackStorm is event-driven automation. As opposed to alternative approaches (which have their own unique benefits) that rely on human input, StackStorm works on the premise that a human being will instead configure the system to watch for certain events and react autonomously on their behalf.

I recently attended NFD12 as a delegate, and was witness to a presentation by the excellent and articulate Dmitri Zimine (shameless brown nosing, he’s my boss now):

Before I get into the details of StackStorm concepts, it’s also important to remember one of the key fundamentals of next-generation operations, which is the fantastic buzzword “Infrastructure as Code”. Yes it’s a buzzword but there’s some good stuff there. There is real value in being able to describe your infrastructure using straightforward, version-controlled text files, and being able to use these files to provision new infrastructure with ease.

Every concept in StackStorm can be described using simple YAML, or languages like Python. This is done for a reason: to enable infrastructure-as-code and event-driven automation to work in harmony. Just like any programming language, or automation tool, this domain-specific language (DSL) that StackStorm uses will take some time to learn, but it’s all aimed at promoting infrastructure-as-code concepts. The DSL is the single source of truth, treat it as such. For instance, use mature Continuous Integration practices (including automated testing and code peer review) when making changes to it. Perform automated tests and checks when changes are made. This will make your operations much more stable.

Note that while you should always treat these YAML files as the single source of truth, there are also some tools in StackStorm that allow you to generate this syntax using a friendly GUI.

One of the biggest strengths of StackStorm is its ecosystem. StackStorm’s recent 2.1 release included a new Exchange which provides a new home for the over 450 integrations that already exist as part of the StackStorm ecosystem. These integrations allow StackStorm to interact with 3rd party systems. 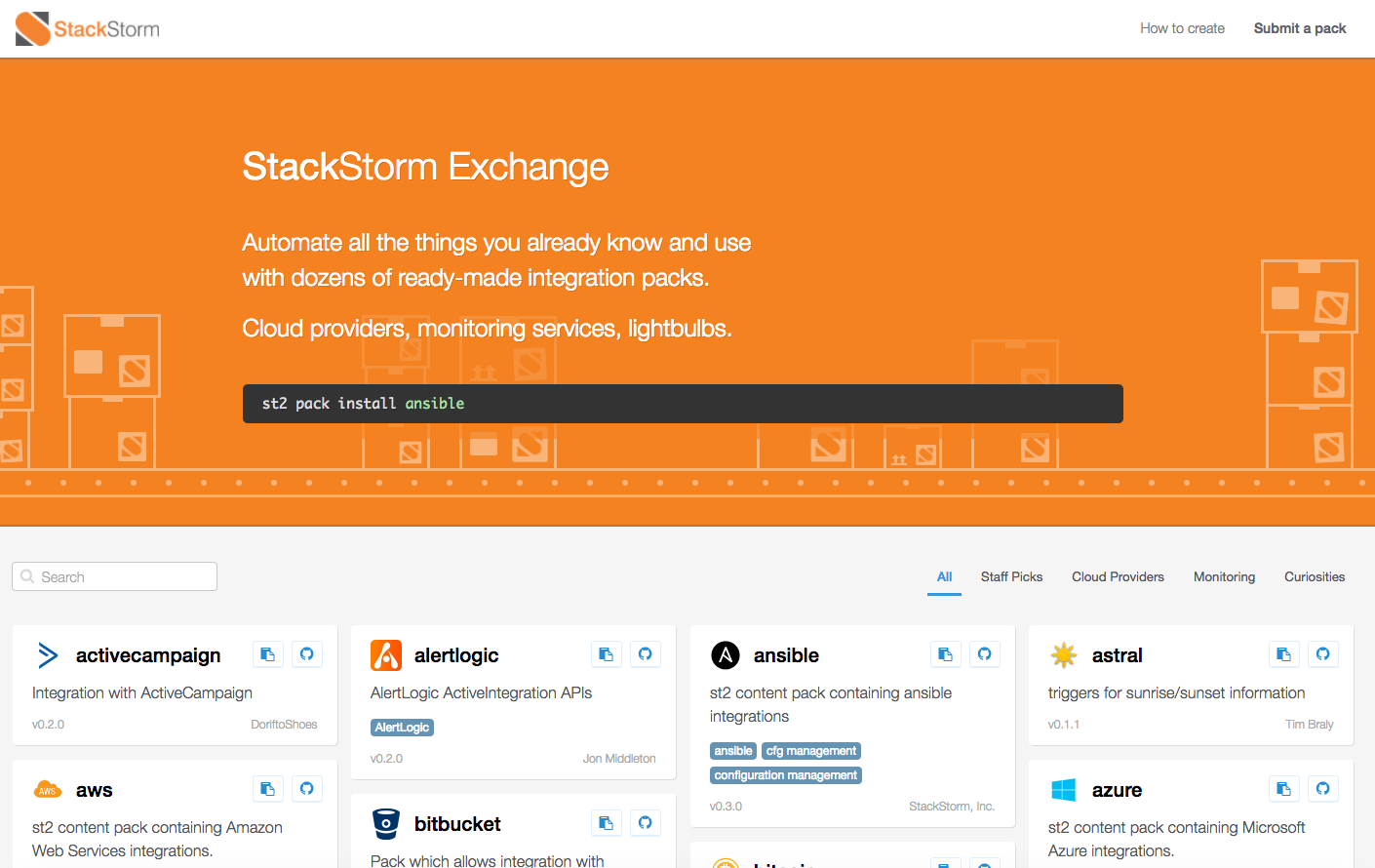 In StackStorm, we call these integrations with “Packs”. Packs are the atomic unit of deployment for integrations and extensions to StackStorm. This means that regardless of what you’re trying to implement, whether it’s a new Action, Sensor, Rule, or Sensor, it’s done with Packs.

As of StackStorm 2.1, pack management has also been re-vamped and improved (we’ll explore packs and pack management in detail in a future post). Installing a new integration is a one-line command. Want to allow StackStorm to run Ansible playbooks? Just run:

Now that we’ve covered packs, let’s talk about some of the components you will likely find in a pack.

Though it’s important to understand that StackStorm is all about event-driven automation, it’s also useful to spend some time talking about what StackStorm can do. Being able to watch for all the events in the world isn’t very useful if you can’t do anything about what you see. In StackStorm, we can accomplish such things through “Actions”. Some examples include:

There are many others - and the list is growing all the time in the StackStorm Exchange.

One of things that attracted me to the StackStorm project is the fact that Actions are designed very generically, meaning they can be written in any language. This is similar to what I’ve done with testlets in ToDD, and what Ansible has done with their modules. This generic interface allows you to take scripts you already have and are using in your environment, and begin using them as event-driven actions, with only a bit of additional logic. As long as that script conforms to this standard, they can be used as an Action.

There are several actions bundled with StackStorm (truncated for easy display):

Nevertheless, it may sometimes be necessary to create your own Actions.. We’ll go through this in a future blog post, but for now, understand that actions are defined by two files:

Actions may depend on certain environmental factors to run. StackStorm makes this possible through “Action Runners”. For instance, you may have a Python script you wish to use as an Action; in this case, you’d leverage the “python-script” runner. Alternatively, you may just want to run an existing Linux command as your Action. In this case you would want to use the “local-shell-cmd” runner. There are many other published runners, with more on the way.

For event-driven automation to work, information about the world needs to be brought in to the system so that we can act upon it. In StackStorm, this is done through Sensors. Sensors, like your own sense of sight or smell, allow StackStorm to observe the world around it, so that actions can eventually be taken on that information.

StackStorm was not designed to be a monitoring tool, so you’ll still want to use whatever monitoring you already have in place. Sensors can/should be used to get data out of a monitoring system and take action accordingly.

Sensors can be active or passive. An example of an “active” sensor would be something that actively polls an external entity, like Twitter’s API, for instance. Alternatively, sensors can also be passive; an example of this would be a sensor that subscribes to a message queue, or a streaming API, and simply sits quietly until a message is received.

Both sensor types bring data into StackStorm, but the data is somewhat raw. In order to make sense of the data brought in by sensors, and to allow StackStorm to take action on that data, Sensors can also define “Triggers”. These help StackStorm identify incoming “events” from the raw telemetry brought in by Sensors. Triggers are useful primarily when creating a Rule, which is explained in the next section.

The particular implementation of the Sensor will determine if it is a “passive” or “active sensor”; there are two Python classes that you can inherit from to determine which Sensor type you’re creating.

“Rules” bring the two concepts of Sensors and Actions together. A Rule is a definition that, in English, says “when this happens, do this other thing”. You may remember that Sensors bring data into StackStorm, and Triggers allow StackStorm to get a handle on when certain things happen with that data. Rules make event-driven automation possible by watching these Triggers, and kicking off an Action (or a Workflow, as we’ll see in the next section).

This is a straightforward concept if you look at a sample YAML definition for a Rule:

Think of “Rules” as the foundation of event-driven automation. They really are the core of what makes “If ___ then ___” possible.

Stackstorm’s architecture keeps everything very logically separate. Sensors sense. Actions act. Then, rules tie them together and allow you to have a truly autonomous system as a result.

Even simple actions rarely take place in isolation. For instance, when you detect that an application node has shut down, there could be ten or more discrete things you need to do in order to properly decommission that node in related systems. So, event-driven automation isn’t always just about kicking off a single action, but rather a “Workflow” of actions.

In StackStorm, we use OpenStack Mistral to define workflows. Mistral is a service that’s part of the OpenStack project, and we bundle it with StackStorm. Mistral also defines a YAML-based Domain-Specific Language (DSL) that’s used to define the logic and flow of the workflow.

In the following simple example, we define a Mistral workflow that accepts an arbitrary linux command as input, runs it, and prints the result to stdout:

Workflows are also powerful in that you can make decisions within them and take different actions depending on the output of previous tasks. This is done by inserting little “YAQL” statements in the workflow (note the statements underneath “on-success” below):

Based on the output from task “t1”, we can choose which of the next tasks will take place.

As you can see, Mistral workflows can be simple when you want it to be, but can also scale up to really powerful complex workflows as well. See the StackStorm/Mistral documentation for more examples.

StackStorm has a huge community and it’s growing. Check out our Community page, where you’ll find information about how to contact us. Also make sure you follow the links there to join the Slack community (free and open), we’d love to have you even if you just want to ask some questions.

Our 2.1 release also happened recently, and it introduces a lot of new features. We’re working hard to keep putting more awesome into StackStorm, and actively want your feedback on it. There’s a lot of opportunity for the network industry in particular to take advantage of event-driven automation, and I personally will be working very hard to bridge the gap between the two.

Thanks for reading, and stay tuned for the next post, covering the internal architecture of StackStorm.