Nearly seven years ago, I wrote a blog post announcing an exciting new project: a new O’Reilly book titled “Network Programmability and Automation”. Of course, I was absolutely thrilled to work on this project with my co-authors Jason Edelman and Scott Lowe, but I was also eager to be able to make this kind of impact on what was still at the time, a very nascent network automation discipline in the industry.

Today, I’m just as excited to announce that a second edition of this book is not only in the works, but the first two revised chapters are available today on O’Reilly Early Access, with several more to come in the months to come. 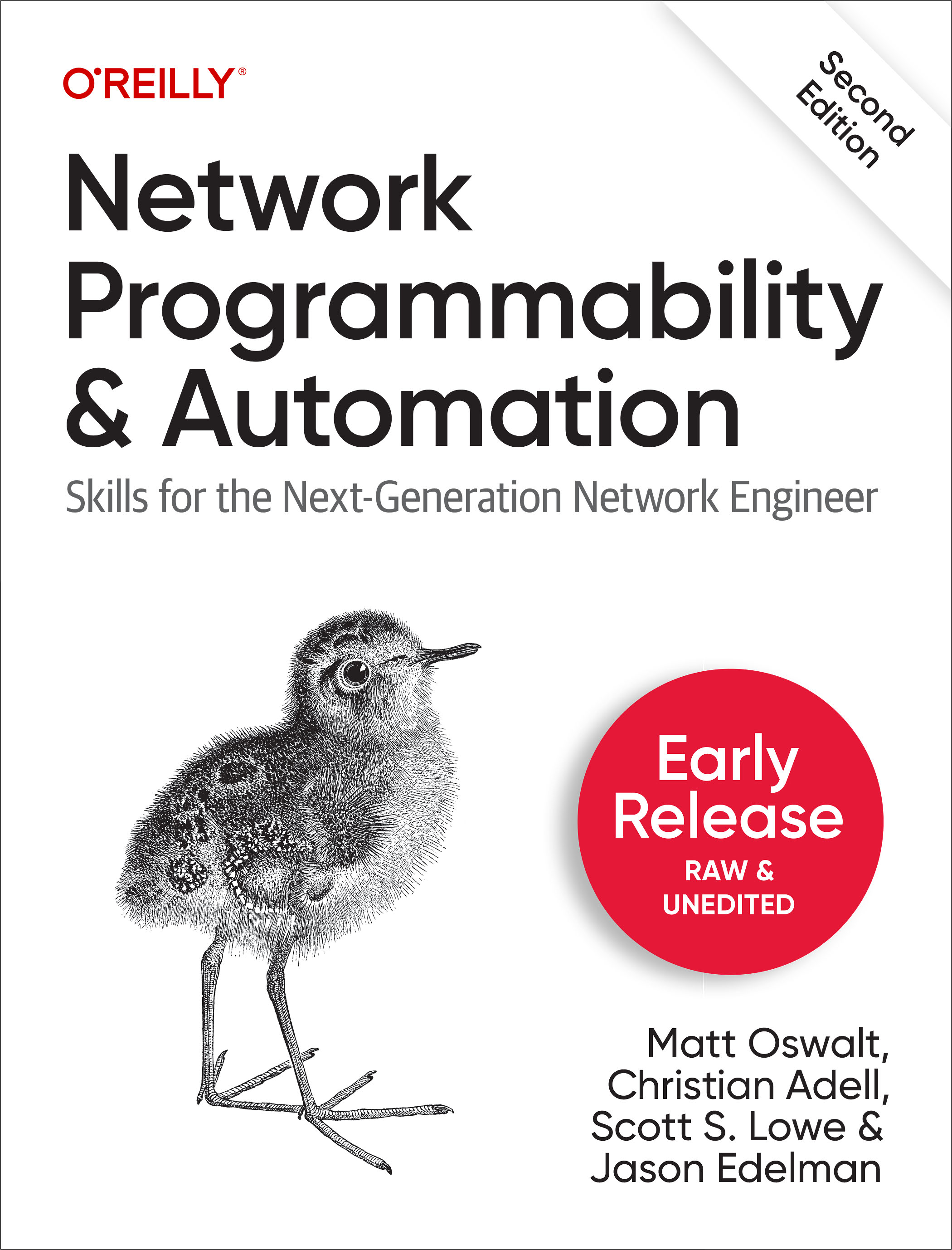 As with the first edition, chapters will be added to the early access copy as they make it through the publishing pipeline, so check back often!

In 2015, network automation was still very new to most of the industry. So much so, that the vast majority of enterprise IT shops hadn’t even heard of many of the topics we ended up discussing in the book’s first edition. It became evident that the biggest problem to solve wasn’t giving folks the equivalent of a doctorate degree, but rather an on-ramp to the fundamentals. The question everyone seemed to be asking was: “where do I get started?”

So, that’s what we focused on in the first edition - not necessarily trying to cover everything, but rather opting to provide a solid base to build upon that was as accessible as possible.

Fast forward to 2022 - I think the biggest difference in the industry today is that network automation is no longer seen as a discipline only for the hyper-scalers. Of course, everyone’s at different places along the spectrum of automation adoption; however, I think the industry perspective is (finally) that the legacy model of device-by-device CLI management is just no longer going to work. Increasing demands on our networks to scale and keep up with ever-changing requirements - while at the same time remaining reliable - are forcing new skill-sets to the forefront.

When we sat down to plan the second edition, this was at the forefront of our minds. Preserving the goal of providing an on-ramp to the fundamentals continues to be our primary objective - and it’s still impossible to cover everything. That said, a lot has changed in the last seven years. There are new technologies to consider (and older technologies to be deprecated), and the industry’s understanding of the various disciplines and operational practices in network automation has improved a lot with seven years of hindsight. So, beyond the obvious general updates that you’d expect from any new edition, it was obvious there were also plenty of new topics to address.

So this takes me to “what’s new in the second edition?”

First, we have a new author! Christian Adell works at Network to Code and has a strong background in network automation. Jason has taken a step back for personal reasons, and we’re pleased that Christian was willing to step up to help make this second edition happen. We thank Jason for his contributions, and we’re glad to have Christian on board to give the book the benefit of his experience.

As for the book itself, this second edition strikes a good balance between adding net-new content and filling out the existing chapters. If you’re just getting started in network automation, the focus on fundamentals is still present, but theres more for you to choose from now. If you’ve dipped your toes in the water, or even if you’re reasonably experienced, there’s still new content you may not have had a chance to dig into if you’ve stayed mostly in the “traditional” automation stack.

But that’s not all! Existing chapters have been updated to include newer technologies and libraries, including (but not limited to):

The bottom line is, this second edition is not just a light touchup and a new cover. This is very much a new book.

We’re still hard at work finishing this exciting new edition, and we hope it continues to be a helpful resource for anyone starting the automation journey, or looking to broaden their perspective. If you sign up for the early access (and we hope you do) - you should be provided with an email address to reach us with feedback. Or, you can reach us via Twitter:

See Scott and Christian’s blog posts about this new edition: